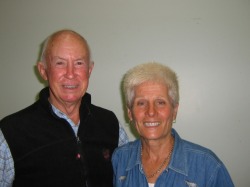 The Cleveland Scottish Country Dance group was founded by dancers Ronda and Peter Ovenden (pictured) in 1973.  The first class was held in the hall at St Paul's Church of England in Cross Street, Cleveland.  However, as the church hall was to be renovated, the class moved to a temporary venue, the home of Arthur and Freda MacKenzie, founder members and keen supporters.

The original CWA Hall in Waterloo Street, Cleveland, then became available and from 1976-1980 was the home of Scottish Country dancing in the Redlands, the music being played on a portable record player, until such time as funds became available to purchase a cassette player.

Once again, the closure of this hall saw the class being held in a variety of venues (even in Ronda and Peter's garage when numbers of dancers diminished), until in 1988 the group obtained the Ormiston Community Hall for Friday night classes, and remained there for well over a decade.  For some years then, the Wellington Point Community Hall was our home, until in February 2014 we moved to the St James' Anglican Church hall in Station Street, Wellington Point, still our home this day.

In 1998 our group celebrated 25 years with a Silver Anniversary Social in the Memorial Hall in the Cleveland Showgrounds.  The hall was filled with almost 150 dancers and friends.  Scottish Country Dance Band, "Tomintoul" played our favourite reels, jigs and strathspeys, and a great time was had by all.

As Ronda and Peter are now trying to fit in some long-awaited travel, Heather Heron has been of great assistance with teaching the class on a regular basis.

Our group is regularly requested to provide a dance demonstration team for events and functions, such as the Omiston House Highland Celtic Day; Beenleigh Historical Village; in Aged Care facilities; fetes, etc.  We operate as a not-for-profit group, and try to fulfil all requests for dance demonstrations.

Traditionally, the last dance of the night is the old highland step dance, "The Shepherd's Crook".  This dance is not taught in class, but is learned by watching the "oldies" dance it, and then joining in when you think you are ready.

Each year, usually before the classes recommence on (mostly) the first Friday in March, our group heads off for a weekend of fun.  In 2009 we  booked out almost all the cabins in a caravan park in Mapleton, and spend most of the weekend enjoying dance classes and a Saturday night social, to which were invited all local SCDers.  In 2010, a large number of our group travelled to Sydney to attend the Edinburgh Military Tattoo.  In February 2011 we were again in Mapleton for another weekend of dancing and friendship. In February 2015 we had a weekend away at Caloundra, where we attended a morning class, followed by a social on the Saturday night.  Local clubs were invited to attend.

The Ruby social-cum-ball was held at the Cleveland Memorial Hall in Smith Street, between the showgrounds and the High School.    This event was a follow-up to our 25th Anniversary celebration in the same hall in 1998.  All dancers, past and present, were invited to help us celebrate this wonderful milestone in our club’s history.  It was only our second celebratory dancing evening in 40 years.

The evening commenced at 7pm with drinks and nibblies, followed at 7.30pm by lots of dance fun with live music provided by Bruce and Baden Mitchell.  At about midway through the evening, a delicious supper was provided.  The cost of a ticket was $10, which included a free lucky door ticket.  Raffle tickets were
also available.

We asked the ladies to dress up, and for the men to don their kilts and jackets.